Just weeks after parts of the U.S. began reopening, coronavirus infections are on the upswing in several states, including Arizona, Utah, Texas and Florida. Dramatic increases in daily case counts have given rise to some unsettling questions: Is the U.S. at the start of a second wave? Have states reopened too soon? And have the recent widespread demonstrations against racial injustice inadvertently added fuel to the fire?

The short, unpleasant answer to the first question is that the U.S. has not even gotten through the current first wave of infections. Since peaking at around 31,000 average new daily cases on April 10, new daily cases dropped to around 22,000 on average by mid-May and have stayed almost steady over the last four weeks. Nationwide more than 800 people continue to die day after day.

Prominent forecasters are predicting a slow but steady accumulation of additional deaths between now and Oct. 1 — more than 56,000 by one estimate, around 90,000 by one another.

“We really never quite finished the first wave,” says Dr. Ashish Jha, a professor of global health at Harvard University. “And it doesn’t look like we are going to anytime soon.”

That said, forecasters say, we could still be due for a true second wave later in the year, citing growing evidence that colder weather could lead to a surge in coronavirus cases.

So why is the U.S. stuck in a coronavirus plateau despite months of widespread social distancing? To explain, it helps to get a bit technical. The key indicator at issue is what’s called the “reproduction number” of the coronavirus — or the R for short — essentially a proxy for how powerfully infection is spreading in your community. It tells you, for each individual who is infected, how many other people this person will go on to infect. When the reproduction number is above 1, case counts will spiral upward exponentially. When it gets to well below 1 and stays there, outbreaks subside.

For example, if the reproduction number is 2, then one person goes on to infect two others. Those two people go on to infect four others. Those four go on to infect eight, then 16 and so on. If you assume, say, a six-day interval between each new round of infections — in just over a month, that one initial person will have launched a chain that has infected 127 people.

Most estimates are that early this year, when no measures were being taken to keep the coronavirus in check, the reproduction number in the U.S. was above 2.

The stay-at-home measures and other social distancing efforts that states undertook this spring served to push the reproduction number to slightly below 1 — to 0.91, according to an estimate by Youyang Gu, an independent modeler whose work is highly regarded by prominent epidemiologists.

This halted the upward spiral of cases. But because the reproduction number was still so close to 1, the curve of new infections never really bent sharply downward. Essentially most of the U.S. reached a kind of steady state — with each infected person passing the virus on to one new person in a regular drip-drip of new infections and new deaths.

Now that states have opened up, the reproduction number has started to creep back up above 1. According to Gu’s analysis, that is now the case in more than two-thirds of the states.

So far, at least, the reproduction number has been hovering at just above 1. Assuming that remains the case, the U.S. won’t see the kind of runaway run-up in cases that was so alarming in New York. But it does mean cases and deaths will continue to accrue steadily.

“If things stay basically status quo and we continue doing what we’re doing, we’re going to continue seeing 25,000 to 30,000 additional deaths a month for the foreseeable future,” Jha says. 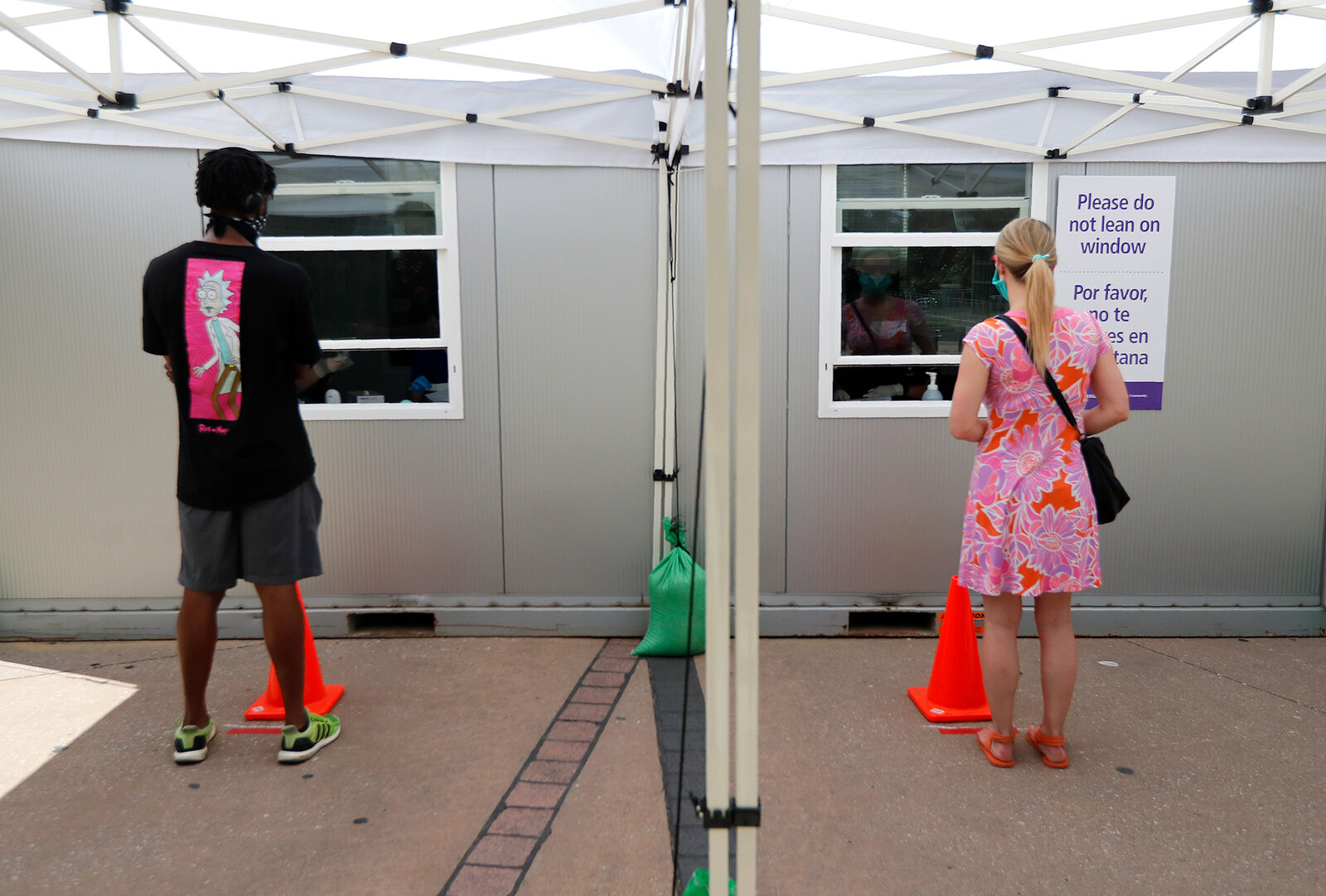 Parkland Memorial Hospital employees give instructions to a man and a woman on how to self-administer a test for the coronavirus at a Dallas walk-up facility. Texas saw a surge in cases within the past week.

Grim as it is, even this picture may be overly rosy, Jha adds. “I’m worried that the idea that we’re going to stay flat all summer is a very optimistic view of what is going to happen over the next three months,” he says.

To maintain a reproduction number that’s just over 1, or better yet, push it back to just under 1, even in the midst of further re-opening “would take a lot of work,” Jha says. “You’d have to have really substantially ramped-up testing and isolation [of new cases].” There’s also evidence emerging that widespread use of masks by people when they are out in public could help, Jha notes. Unfortunately, he says, it is hard to envision the U.S. adopting any of these practices to a sufficient degree “based on where we are today.”

It gets worse. On Thursday, Chris Murray, the head of the University of Washington’s Institute for Health Metrics and Evaluation forecasting team, pointed to growing evidence that the coronavirus will spread more easily as the weather turns cold.

Murray’s team analyzed the pattern of the spread of the coronavirus in the U.S. to date. They found that the drop in the reproduction number since early spring can’t be entirely explained by obvious contributing factors — such as people’s reduced mobility or mask wearing or better testing. And when the team looked for additional variables that could explain the change, it found a strong correlation with warming weather.

This finding doesn’t shed light on why transmission may be reduced in the warmer months. (For example, could it be that coronavirus droplets don’t hang in warmer air for as long? Is it simply that people spend less time mingling with each other indoors?) But Murray says that “as time goes by, the evidence is accumulating that it is a very strong predictor of transmission.”

The effect is not strong enough to make the virus completely disappear over the summer. But it does mean, Murray says, that come autumn transmission will likely pick up.

“We start to see a powerful increase that will be driven by seasonality starting in early September and these numbers will intensify through till February,” Murray says. “So seasonality will be a very big driver of the second wave.” 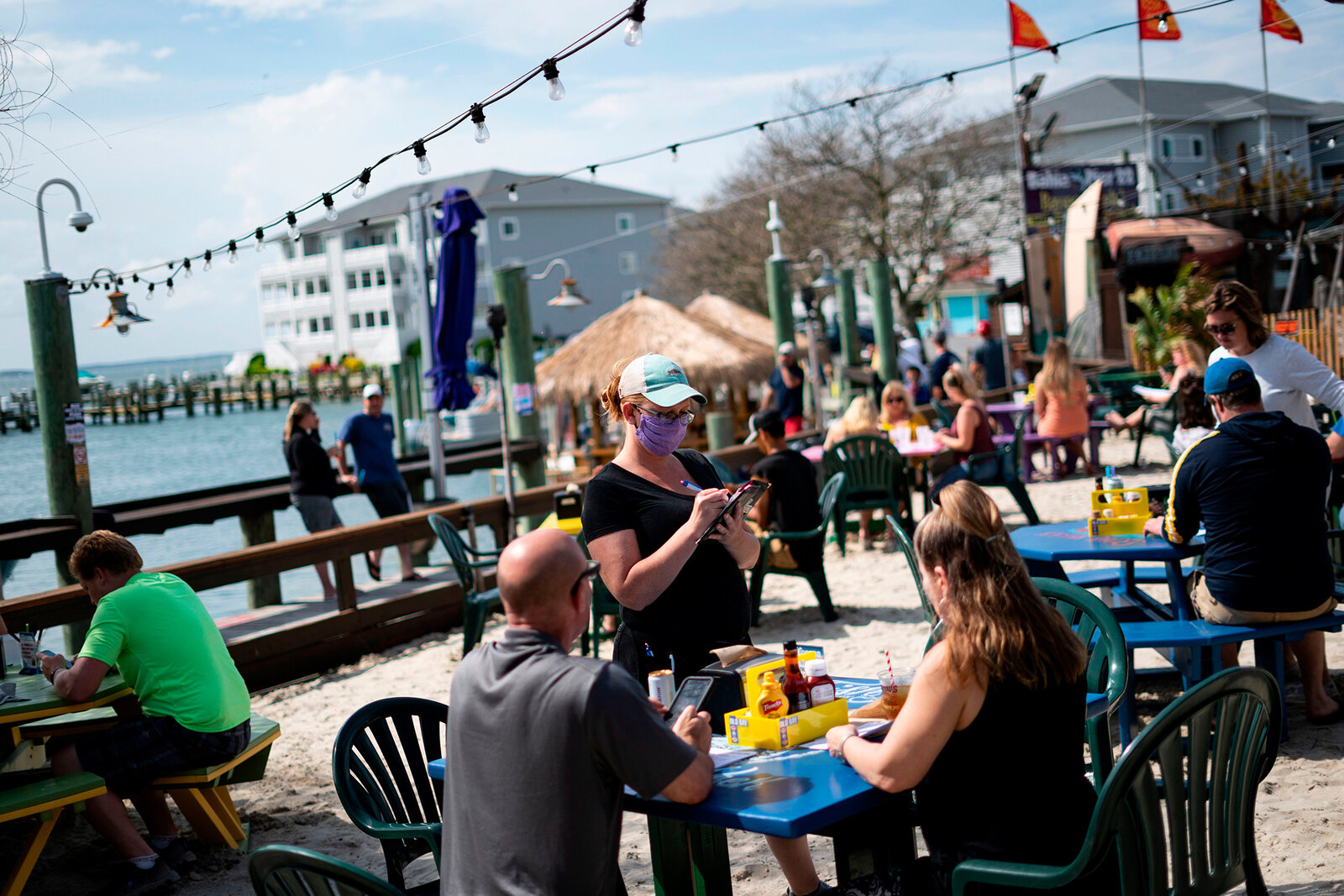 Restaurants have opened up in cities across the country. As more people intermingle, coronavirus modelers say that any steps to mitigate risk such as social distancing or mask wearing can have an impact on the spread of the virus.

He adds though, that this does not take into account actions that could mitigate the impact. “Clearly what individuals choose to do can moderate the forecast,” he says, noting that widespread mask use and avoidance of social contact with people outside one’s household could help.

Parsing the effects of protests

Even as many public health experts cheered the anti-racism protests — and the possibility that lives could ultimately be saved if demonstrations result in policy changes that reduce racial inequities — some wondered at the extent to which these would come at a cost of increased deaths from COVID-19.

But calculating just how many additional deaths the demonstrations might lead to is difficult. There is no accurate count available of the number of participants, let alone their ages — which appear to skew young, suggesting the vast majority of those infected would not experience bad outcomes.

Also with little prior research on this particular form of intermingling, it’s hard to say how much infection results from it. Though many people have been standing and marching in close quarters, being outdoors mitigates the effect of crowding, as does mask use.

But the biggest determinant of how many deaths ultimately result is what happens in the aftermath of the demonstrations, says Marc Lipsitch, an epidemiologist at Harvard.

“How much transmission happens later on,” Lipsitch adds, “is far more dependent on our actions as a society and whether we can suppress transmission around the country than on how many people go to the protests.”

In other words, perhaps the better question is not, will the demonstrators cause a spike in COVID-19 infections? But rather will all of us — the public and our leaders — behave in a way that keeps the reproduction number low and ensures that these marches and any improvements to racial equality they achieve don’t come at the price of many more COVID-19 deaths.