New York (CNN Business)Across the country, major meat processors are starting to shut down plants as employees are getting infected by coronavirus.

Tyson (TSN), one of the world’s largest meat processors, suspended operations at its Columbus Junction, Iowa, pork plant this week after more than two dozen workers contracted Covid-19 there. Tyson said it would divert livestock that was headed to Columbus Junction to other pork plants in the region to minimize the impact on its production.
JBS USA, another major meat processor, has stopped operations at its beef plant in Souderton, Pennsylvania with plans to reopen April 16, after two weeks. The company decided to close the facility after several members of the plant’s management team stopped going to work because they were experiencing flu-like symptoms, a company representative explained, adding that all other JBS USA’s plants are still open. Cargill has also paused operations at its protein plant in Hazleton, Pennsylvania, where 900 people typically work. 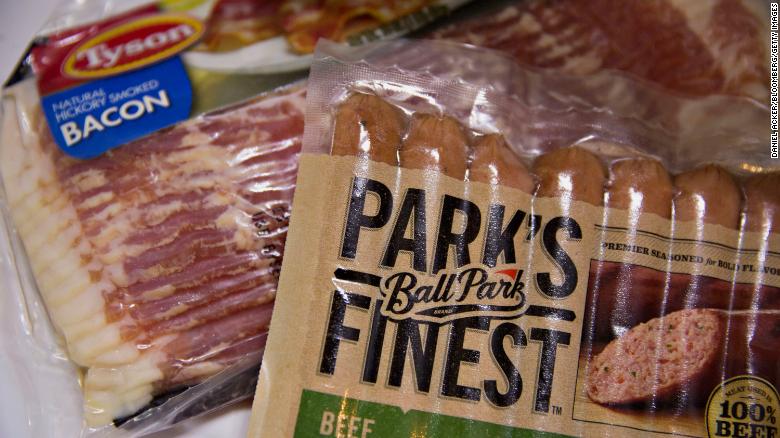 Major meat processors are temporarily shutting down plants because of the novel coronavirus.
“This will allow us to minimize the impact of COVID-19  and continue [to] follow health department guidelines,” said Jon Nash, North America lead for Cargill Protein, in a statement to CNN Business.
Consumers are unlikely to see any shortages because of production disturbances. But the closures are devastating for some meat producers, which have remained open during the pandemic. Food suppliers are essential businesses.
The United States has a large enough meat inventory to prevent shortages for consumers, explained Christine McCracken, senior analyst of animal protein for Rabobank. Processors that were previously servicing restaurants or cafes have started to sell to retailers. And some restaurants are selling groceries, including meat, directly to customers.
“Retail is full,” said McCracken. “I don’t anticipate any real shortages for the consumer.”
The closures mark “a very small fraction of the overall slaughter,” in the United States, she added. “At this point there’s really no reason to think that there’d be any major disruptions.”
But there is potential for the closures to accelerate, which could put a strain on the system and further harm producers.
If workers sicken each other, plants could remain closed for longer or operate at reduced speeds. Already, fewer employees are working because they may have to stay home to care for children or sick relatives, among other reasons.
“The smart money would say that it will be an issue at more plants, we just hope they don’t all overlap at the same time,” she said. “If it expands to more plants it becomes a serious issue.”
Producers would “suddenly have nowhere to go,” she said. If local outbreaks mean closures of a number of regional plants, producers used to selling their products locally could run out of options. For those producers, “it is a crisis.”
National Cattlemen’s Beef Association President Marty Smith outlined the situation faced by cattle ranchers in a letter to President Trump on Wednesday.
“The onset of COVID-19 has resulted in the steep decline of both the cattle futures market and cash trade -— resulting in significant financial challenges for our members,” he wrote, warning that “the market woes for cattle producers will only grow if packing plants shut down or slow down for an extended period.”
Source
Tags
Business layoffs meat sick
April 11, 2020
0 308 2 minutes read
Facebook Twitter LinkedIn Tumblr Pinterest Reddit VKontakte Odnoklassniki Pocket WhatsApp Share via Email
Show More
Share
Facebook Twitter LinkedIn Tumblr Pinterest Reddit VKontakte Odnoklassniki Pocket WhatsApp Share via Email Print